(I know it's a bit naughty, and I'm usually SO NOT naughty, but I couldn't resist. I'm just feeling a little guilty for posting. Sorry)

While making my blogging rounds today, I read Julie's post about, among other things, taking her son to Disney World.

And it got me to thinkin'.

I thought about our first trip to Disneyland in February of 2008. I remember the magic we all felt, and how I wish I were there NOW. I love Disneyland. All of it. I want to live there. Seriously...(

So, while I allowed my mind to wander back to that happy time, I pulled up the slew of pictures I took from the trip. As I went through them, one caught my eye.

We had just left Goofy's Kitchen, where we were delighted to have had breakfast with many of our most beloved characters. We were heading back toward the park entrance, when LJ spotted this topiary and we decided to stop for a picture. Much later that day, when we had returned to the hotel and LJ was asleep for the night, I sat at my computer and downloaded all the pictures I had taken that day. I carefully went through each shot cropping, correcting lighting, and removing redeye. When I got to this one, my focus wasn't on Mickey, but on LJ. It took me a minute to see it. Then, I giggled. Then I giggled a little harder. Soon, I was hysterically laughing, trying to call DH over to see, through teary-eyes. It didn't take him nearly as long to see what I was laughing at (must be a guy thing... HAHAHAHA). Pretty soon, we were making all kinds of jokes. Disneyland really is the Happiest Place on earth!


Do you see what we saw? 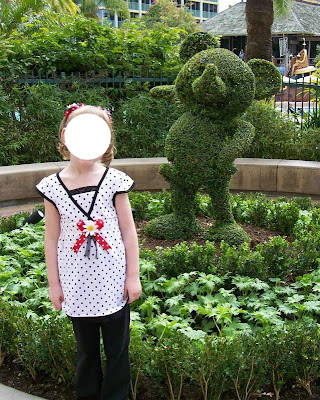 Now that you've had your giggle, stop by Mel's and see what the rest of the class is sharing.

ETA: A few days after our trip, I actually called guest services and told them about the topiary. I tried to explain, but it was soooo awkward. I opted to get the agents email address and send her the pic. I waited while she opened it. Then I waited while she laughed, and then apologized profusely for doing so. She asked if she could send the picture to maintenance, to which I'm sure they were delighted. She called me later that day to tell me that they had "fixed Mickey." I'm so glad people still have senses of humor!

That is the funniest picture ever. Shocking that the castmembers would let that slide. Thanks for making my day!

OMG... I think that is about the best disney picture I have ever seen. If I ever get back to disney, I know I'm going to be checking out all the topiaries for naughtiness!

That is hilarious!! Thanks for sharing! I can only imagine the conversation...

OMG! That is so freakin' hilarous!! We were just in WDW this weekend, I wish it would've occurred to me to look closer! Lol thanks for sharing!

Hahahah, omg, PRICELESS!! There's a memory for the family album!

Hilarious! You should send that to Accidental Dong!
http://accidentaldong.blogspot.com/

This reminds me of all the naughty little tidbits hidden in Disney's animated movies. Was this REALLY an oversight by the gardeners?

This is too funny!! Mickey got fixed! Thanks for sharing!

That is too funny.

That is so hilarious. Good on you for sending in the pics so they could fix it. Really, what was it supposed to be???? LOL

Nominated you for a blog award sweetie!

HAHAHHAHAHA! Cracking up right now! Glad you called about it- good for you!