You have got to be kidding me!

This is purely a "venting" post. I am so pissed off right now!

Although we are one of the "lucky" ones that have infertility coverage, apparenlty Bl.ue Cr.oss B.lue Shi.eld has a bunch of mentally challenged morons running their claim departments. I swear these people are the dumbest people on the planet!

Because we don't have a participating andrology lab within 100 miles of our home, we were given in in-for-out approval to do 10 IUIs through 12/31/08. This gives us permission to use an out-of-network provider, and they are supposed to reimburse us at the in-network amounts. It is supposed to take 6 weeks from the time you send in the claim to recieve a check. I'm sure you can see where this is going...

For our IUI that we did in June, it took them 3 months to process the claim. The had a different reason everytime I called as to why they denied it 3 times. "The in-for-out is in your name, and the reciepts are listed under your husband, even though your name is listed in the corner; under 'patient', it shows your husband..." (Their medical management team that approved the IFO told me that they have to put infertility IFO's in the females name always, but that it automatically covers the cost of the entire procedure, male and female portions) "You have to have seperate reciepts for the IUI, and for the sperm preparation" (Medical managements says it doesn't matter, and that it is all one procedure. Can't have up without down). Finally after 3 months, and countless phone calls and appeals, I got my check.

Well, when we did our 3rd IUI on Sept. 29, I sent in 2 reciepts just in case along with a letter explaining what happened with the previous claim and referencing the number so that they had an example of sorts, and also gave them my in-for-out number. I gave them all the information that the form requested, along with every little thing shy of my genetic sequences. Apparently, that's required too.

I sent the information to the address listed on the form, who then sent it to the local address (which is NOT our insurance, we have Empire BC.BS, they sent it to Regence BC.BS) so I recieved the ENTIRE package back. THE ORIGINALS!!! They said that I had an invalid ID number listed (although I took it directly from their website) and had to send it back in. Of course its because they SENT IT TO THE WRONG DAMN INSURANCE!!!!

AAAAAAHHHH! I am sooooo pissed off right now! I could joyously strangle the next dim-witted claims representative I have to talk to... of course they are closed tonight! Lucky for me, I'm great at holding a grudge and I'll have plenty of penned-up hostility waiting for them at 7 AM sharp.

The silver lining in all this? Well, that would be the fact that the pissed off adrenaline that is flowing through my body is a GREAT pain killer. I haven't felt any pain in my foot (a first all day) since I got the mail.

I was checking in with Hope2marrow's blog (a new addiction of mine), and she had a very thought provoking post. I have never actually figured out how long we've been dealing with infertilty, and Hope's post made me wonder if figuring it out would give me new insite. So... I copied her. (Thanks for the idea Hope2marrow... it thought it was really cool, obviously.)

Here is my infertilty struggle in numerical form:

Well, that adds perspective.
Posted by Meim at 11:46 PM 3 comments:

I just wanted to post quickly and let you all know that I am still alive, not utterly depressed, and I haven't given up.

I am sorry that I have been so busy. I am going in for another surgery on Tuesday (not IF related, not life threatening) and I will be on bed rest for 2 weeks after. I expect to have PLENTY of time for blogging then.

Thank you for all your kind words on my 66th "worst day ever" (I'm a little dramatic, what can I say?). It means a lot to know that you are all here for me.
Posted by Meim at 11:41 PM No comments:

Is today the day?

My beta is today. I am so nervous, and not really feeling all that great about it. I'm not sure if that's my gut instinct telling me that this won't end well, or if it's years of experience trying to protect me from the hurt and disappointment that comes with a negative result.

I hope that I get the surprise of a lifetime and that this 5 1/2 year struggle ends with this one last blood test.

I was really nervous yesterday because my temp dropped. I took it at a much earlier time than normal but it still got to me and I thought for sure that I was out. Today it went back up, so I have no idea what to think. And, because this is only my second cycle since the surgery, I still haven't figured out what pains and twinges mean AF is coming, and what are just normal everyday things. Before, the endometrioma would get larger as AF approached, and it always gave me a good 24 hr. warning. Now I feel like I'm dangling in the wind. I have no idea what to expect. I'm grateful for my BBT chart, because I'm pretty sure it will be my only indicator until I figure things out. I'm glad that my RE made such a big deal out of me using one. It has proved to be invaluable... nerve racking, but invaluable at the same time.

Well, I'm starting to ramble, must be the anxiety getting to me. Wish me luck!
Posted by Meim at 7:19 AM No comments:

So I got the crazy idea (seriously, I've never done this before) to overlay this cycles chart with my pregnancy/miscarriage chart from March. I'm not so sure it's a good thing or a bad thing, but so far they look very similar.

Can you predict a miscarriage by temps?? I honestly have no idea, other than a major drop, suggesting a low progesterone level.

What are your opinions? Good- suggesting a pregnancy, or Bad- predicting a miscarriage?

(the green line is this cycle, blue is March) 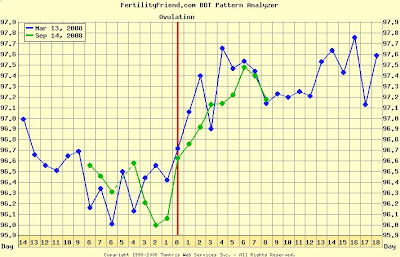 Not a lot has been going on in my neck of the woods, so I apologize for being the crappy blogger that I am. (If it makes you feel any better, I'm not doing so great with my family blog either).

Our IUI went well, and we are not just waiting for DH's small scale SA that went with it. As far as any pg symptoms, they are small... if they even are pg symptoms. I've been feeling a bit more emotional lately (could just be that I jumped into this with both feet, and I'm still looking for the ground), and I have been pretty tired too (staying up WAY late, could be the culprit, but let's pretend, k?).

Right now I just feel like I'm in limbo. I'm not feeling bad about this cycle, but I'm not full of that super-charged enthusiasm that I was a week ago either; which makes me lean toward thinking that maybe this isn't my month. It's such a screwed up process. I guess after hoping and praying for so long, I just expect that if I am pregnant, that I would "feel" different right now.

Anyway, that's what going on in Meimland. A lot of trying to distract myself, with even more emphasis in trying to make it to my beta next Monday. I serioulsy doubt I will make it that long... Thursday is looking pretty promising as a hpt day right now. AAAAHHHHH! I HATE not knowing!
Posted by Meim at 2:34 PM 2 comments: