Over Before it Began...

Well, at least that's how I feel.

When we arrived at the clinic this morning for transfer, we were promptly ushered into a conference room where we waited anxiously for Dr. H to come in and give us an updated report on how our embies were doing.

He started by telling us that all 6 of the eggs retrieved were mature, which he said almost never happens, and that that was a good thing. Then his expression changed. He told us that as of right now, we still had 2 embies. 1-3 celled, graded fair, and 1-1 cell, graded poor. I started crying.

He said that they had seen poor embryos make it, and women have successful pregnancies, but ovbiously the odds weren't good. He said the fair embryo is where all our hope lies. I cried some more. He said the embryologist was strongly recommending that we do assisted hatching because the zona was pretty thick. He said that it could be what really helps the little guy take off. We agreed.

When we went back for transfer, they got me in the stirrups and all ready to go. The embryologist came in and told us that they had a new fancy-shmancy camera hooked up to the microscope, and he was actually going to let us watch him do the assisted hatching. They put it on a giant flat screen TV in the room, and we watched as he used a laser to etch a tiny tunnel through the zona to help the embryo hatch. (It was pretty cool, and we actually got video, but I can't figure out how to get it from my cellphone onto blogger.)

Dr. H inserted the cathedar, and told the embryologist (Dr. R) that we were ready. He cheerfully replied, "loading 1 embryo". Wait. What? I quickly said, "no, 2, right?" He looked at me all confused, and Dr. H clarified. "1-3 celled, and 1 poor." Dr. R called back, "oh, the requisition just says one. Why are we doing both? The poor embryo never cleved. It's arrested." I started sobbing. Obviously, both Dr. H, and Dr. R didn't quite know what to say, so Dr. R finally offered to load it as well. "We can tranfer them both, Meim, if you want us to." "What's the point?" I asked. "It would be like tranfering the ones that didn't fertilize!" "That correct" he said. "I'm sorry for the confusion" said Dr. H. "I misunderstood Dr. R and I's prior conversation." 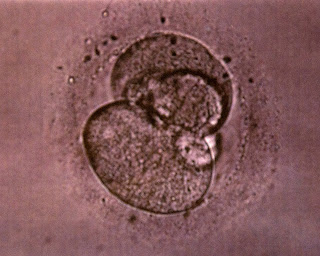 [MB before the assisted hatching]

So, in went one embryo. 3-celled, with a "fair" grading. When it was over, and I had managed to stop crying, Dr. H asked if we had any questions. I asked him if single embryo transfers were ever as successful with "fair" embryos, and he answered that they didn't usually do single embryo transfers unless the embryo was graded "good" or better.

Yeah, I'm screwed. I feel like this was all for nothing. I am angry because instead of getting answers, all we have are more questions. Was it the sperm or the egg? They don't know. Is it possible for us to have better success with ICSI? They don't know. They can't tell if the sperm actually made it into the eggs, but didn't fetilize, or if they didn't get though at all. They can't tell us anything!

And to make things even better, Dr. H told me to be watching for signs of OHSS. With my estrogen levels being as high as they were and only getting 6 eggs, he said that it is still a very real possibility. Nice, huh?

Also, in addition to the PIO which we all know I just LOVE, I am also on heparin twice a day to give this little embie that we've named, M.B. (maybe baby) a better chance of implanting, as well as to help prevent another ectopic.

I feel pretty close to hopeless. I wish we never even did this.

Meim, I'm so sorry. This isn't fair, it's all so wrong. I can't believe you had to hear about embie number 2 that way, what an awful moment that had to be. I'm thinking about you, and I'm so sorry.

You have MB in there working away, and I'm definitely going to stay positive for you, because I know how hard that can be yourself. So do whatever you need to do right now (except maybe going to Vegas to get crazy...don't do that) cuz I'm holding down the optomistic side for you.

Thinking about you, and wishing it went differently. I'm so sorry.

Oh no! After the steady decline of hope over the last few days, with egg # lower than expected & then the fertilization report, I had hoped so much for you that you'd at least have two great ones to transfer. I'm so sorry it's turned out this way, though of course I'll keep hoping for your little MB! I'm here if you want to talk.

Hey Meim,
I can't believe this has happened. My heart is breaking for you that you feel like this cycle was a total waste. We know that it's not yet but I know that's not going to make this 2WW any easier. Oh, I just wish I could be there in person to give you a huge hug.
Also, I feel you on the drug-palooza. I am also on a blood thinner and the needles are huge. I'm still holding onto hope for you and will be here for you if you need to post and vent. You know you can email me if you need too.

Well, it only takes one..... and that may not be what you want to hear right now, but you need to hang on to any hope you can muster. Little MB doesn't want to stick around in a sad woman; it wants to cling to hope in a hopeful woman. Did you hear that- HOPE.

I know this is not the best news you have ever had, but it definitely isn't the worst either. You've come through worse and still had hope, so you can pull through this with HOPE.

You know I adore you, but I feel like you need to hear this. Cling to the possibilities, to love, to dreams, and to hope that MB could be "your one."

Chin up. Breathe. Dream. Hope.
I know you, and I know you can.

sending hugs and praying for miracles...

I am so, so sorry that things aren't looking well. With my IVF I had one embryo at 5 cells, grade C, with fair symmetry and the other was 10 cells, grade B, also with fair symmetry. The docs said that the 10 celled embryo was a rockstar but not to get my hopes up for twins. Yeah...I have two beautiful 18 month olds, and that 5 celled grade C embryo I believe is my daughter...who outweighs her brother by like 5 lbs. So there is always hope...even with one embryo, even with fewer cells than they like to see and even graded fair, it can still happen. *hugs*

Sending you lots of love and light.