You almost made me crazy, Anniversary. ALMOST!

Not because I have a "feeling", or because I am just so damn eager to know (because strangely - I'm not), but because 9 years ago today, I POAS. And that was a pretty good day.

The night before I had had this crazy dream. (I know, I know... me and my dreams) and I was telling my friend about it on our way to the store to pick up some lunch. When I had finished explaining what had happened in my dream, she stopped in the middle of the aisle and asked, "Well, are you late?" Of course I was late! During that period of time I was always late. I honestly hadn't thought anything of it. When I told her that, she insisted that she wasn't going to let me leave the store until I bought a pregnancy test. So, I did.

The whole way back we were quiet. I felt dumb buying a test, and she felt confident that my dream "meant' something. When we made it back to school, (we were in cosmetology school together) I excused myself to the restroom to take the test. Because this was before I was an absolute basketcase (thank you, IF) I nonchalantly took the test and set it on the back of the toilet while I washed my hands. I glanced back at the stick while the water was still running, and totally did a double-take. It was positive.

I left the restroom in a daze. I was shaking so hard I almost didn't dare walk. My friend already had a client in her chair, but as soon as she saw my face she went white, and mouthed the words, "no way." I didn't know what to do. So, I ran into an empty classroom and cried tears that came out of nowhere. I wasn't sad or anrgy. I was in complete shock. When another friend came in to see if I was okay, she saw the test on the counter next to me, and offered to take me to the Dr. to confirm. I quickly dialed my family physician on my cellphone and asked if I could come up. The nurse told me that it wouldn't be a problem, so we told the instructor's we had an emergency and left.

I walked into the office, was spotted by the nurse I had spoken to and quickly ushered into a room. She gave me a cup and some instructions and pointed me to the bathroom. After she had done the test, she came back in and said, "It's positive, would you like to know your due date?"

About 7 1/2 months later, this little beauty entered our lives. 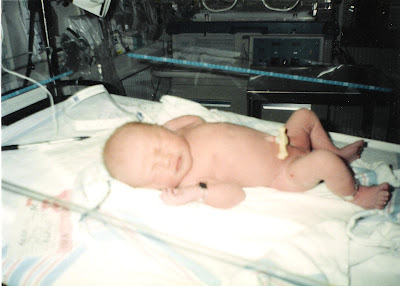 P.S. I still have the pee stick from that day. I am never going to throw it away. And so far, it hasn't given me a reason to. It still looks the way it did the day I tested. The test strip never turned yellow, and the lines are bright and crisp. Man, they sure don't make 'em like the used to!

What a beautiful story. I guess I'm kinda glad you didn't if you wanted to preserve that memory!! I still have mine from DD and will never throw them away either.
Can't wait until you do POAS though!
love

Aww, sweet LJ. I can't WAIT for you to POAS!!!!!!! Crossing everything for you. Lurking. Praying. Hoping!!!

Wow, you have some serious willpower. The wait is soooo long!

Precious. I still have my fingers and toes crossed for you. I'm hoping this it IT!

I love this post! What an amazing story :) Can't wait for you to POAS this time...